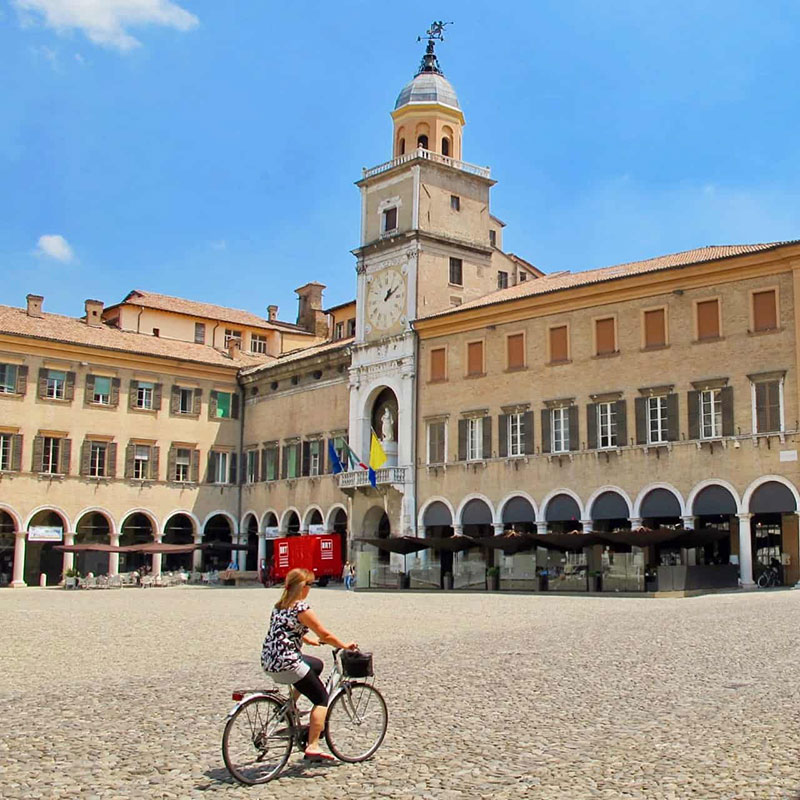 Modena is the ideal city: its admirable architectural treasures are a Unesco World Heritage Site, its hospitality focuses on cuisine and cultural life, all with a fascinating and characteristic blend of innovation and tradition. Visitors are pampered at the table by the flavours of traditional balsamic vinegar accompanying local specialities and can stroll in the narrow city centre streets or Piazza Grande. They will be enthralled by the mystical beauty of the Cathedral or fascinated by the modern products of Modena's inventiveness such as Ferrari, Maserati, Pagani and Stanguellini motor vehicles.

Piazza Grande is the heart of life in Modena and the place where the most significant and most-loved monuments are located. Piazza Grande is also home to the Palazzo Comunale. Its construction took place over several different stages starting from the Middle Ages and is currently home to the Town Hall. Not far from the Ghirlandina Tower, there is the 1600s Ducal Palace the work of Bartolomeo Avanzini and today home to the prestigious Military Academy. The Cathedral is the work of the great architect Lanfranco and master sculptor Wiligelmo. It is one of the finest European Romanesque masterpieces.

Modena offers tourists beauties concentrated in its graceful historic centre, which was the capital of a duchy under the Este lords, who resided here from 1598. UNESCO has acknowledged the universal value of the city's monumental treasures by declaring the Cathedral, Piazza Grande and the Ghirlandina Tower a Unesco world heritage. 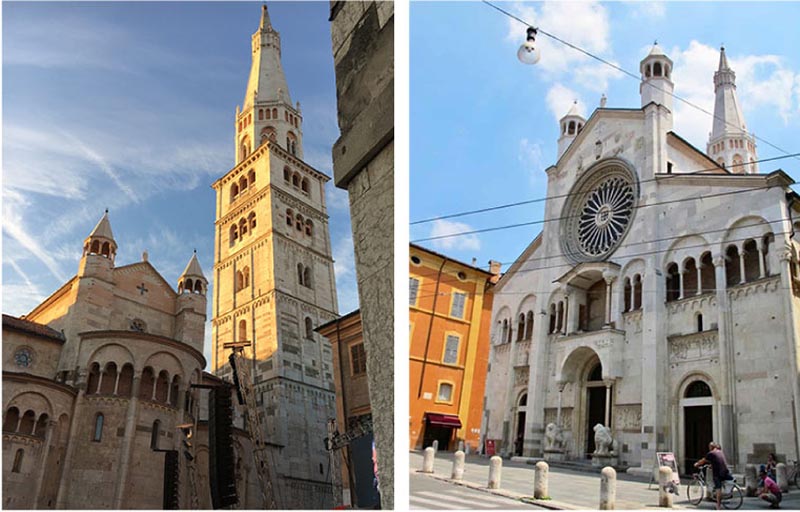 The Torre Civica or Ghirlandina Tower, that had the double function as both a religious monument and as defensive and lookout tower. At 289 feet tall, it is connected to the Duomo by way of two arches; it was raised at two different points in time, and finally completed in the 14th Century. Be sure to include a climb up the 200 steps of the Ghirlandina Tower in your plans. From the top you’ll enjoy a spectacular 360° view of the city—a truly special experience! 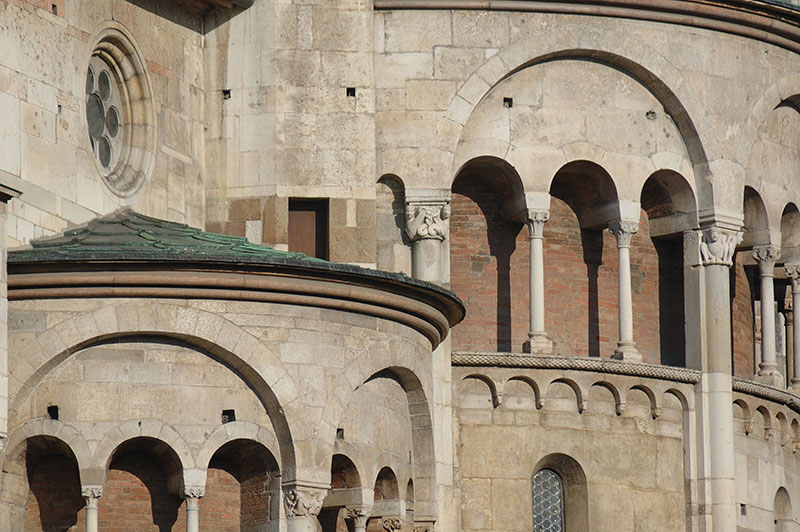 Once you’ve reached the Ducal Palace, now the home of the Military Academy, you’ll surely be enchanted by its beauty and by the vastness of the space that surrounds it, the fascinating Piazza Roma. Construction of the Ducal Palace, a project of architect Bartolomeo Advini, began in 1634. The building’s well-proportioned façade hints at its spectacular interiors. 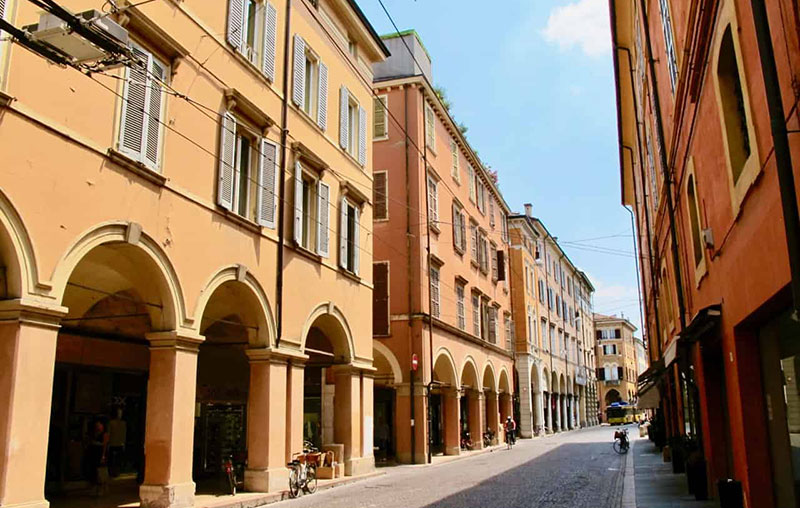 Via Emilia, the important Roman road that crosses the city, leads to Piazza Sant'Agostino dominated by the Church of Sant'Agostino itself, the interior of which has an admirable and splendid "Lament for Christ Crucified" by Begarelli, a 1500s sculptor from Modena. There is also Palazzo dei Musei, home to numerous cultural institutes and art collections, such as the Civic Museum of Art, the Archeological Ethnological Museum and the Estense Gallery. As in Bologna, Modena also boasts its own notable university tradition: l'Università degli Studi di Modena and Reggio Emilia was founded in 1175.

No one can claim to know Modena without having tasted its famous typical product - the traditional Modena balsamic vinegar - an exquisite condiment made from cooked grape must that is aged for many years in wooden barrels. An occasion that cannot be missed for discovering some of the secrets behind how it is made is to visit one of the many farms that open their vinegar cellars on appointment. 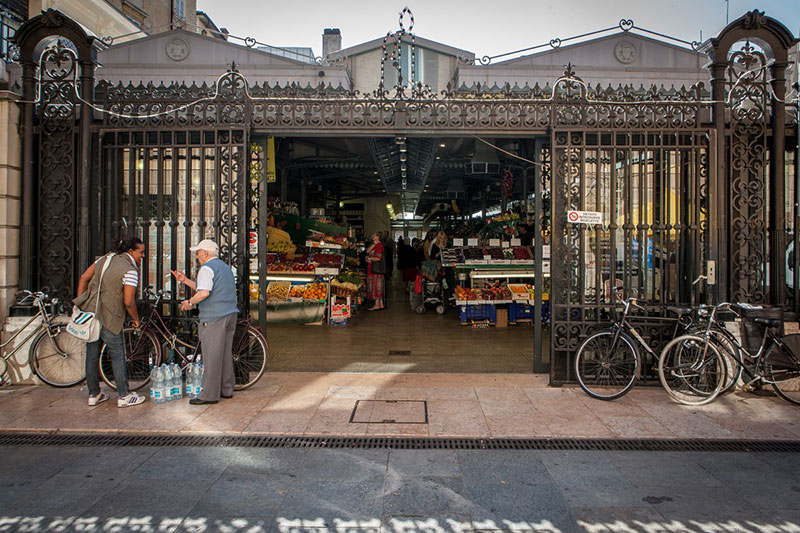 When it’s time for lunch, dive into the cheerful ambiance of the historic Albinelli Market, an art-deco style marketplace that offers PDO (protected designation of origin) and PGI (protected geographical indication) products, welcoming areas to enjoy a quick bite, and take-out options.

An ideal menu in Modena must start with cured meats, first among them Modena Ham. A place of honour among first courses goes to tortellini. Main courses especially include zampone, made with ground pork meat cured in the skin of a pig's trotter. Nor should one miss traditional Modena Balsamic Vinegar served on Parmigiano Reggiano (Parmesan cheese). And lunch can be accompanied by a good glass of Lambrusco, a sparkling red wine. As for fruit try the delicious cherries from Vignola. 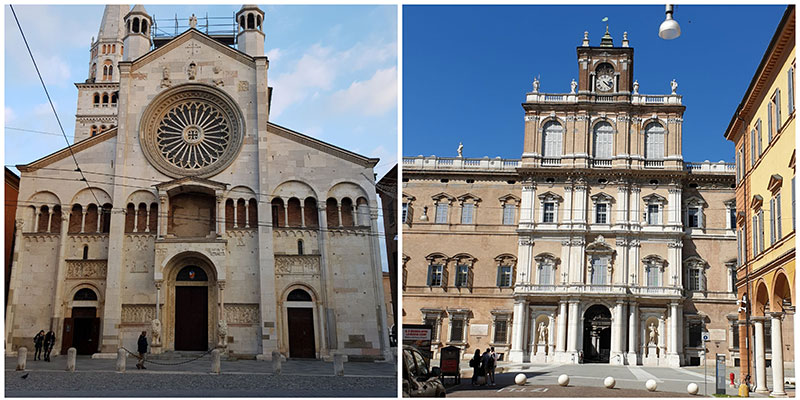 Beginning in 1598, Cesare d’Este, Duke of Modena moved the Duchy Capital from Ferrara to Modena, newly connoting it as the City of d’Este. The city lived a phase of major importance during the domination of the House of Este that ruled it from 1288 to 1796. Thus an important point of reference for the Duchy d’Este, it became the center of national political events and peculiarities in the Italian cultural tradition, both of which its monuments reflect.