The true essence of a visit to Bologna is found within its old town, its streets and its wonderful squares, meeting places of sociality and conflicts, extremely versatile and ever-changing over time, and yet nerve center of the city even today.

Begin the visit in Piazza Maggiore, the city’s beating heart since the Middle Ages, which dates back to the early 13th century and where two of the city’s most recognizable landmarks are located, the Basilica of San Petronio and Palazzo d’Accursio, the town hall. The main square is surrounded by Piazza Galvani on one side, enclosed on the east by the Archiginnasio’s porticoes, and by Piazza Nettuno on the other, named after the famous Neptune Statue by Giambologna towering in the centre. 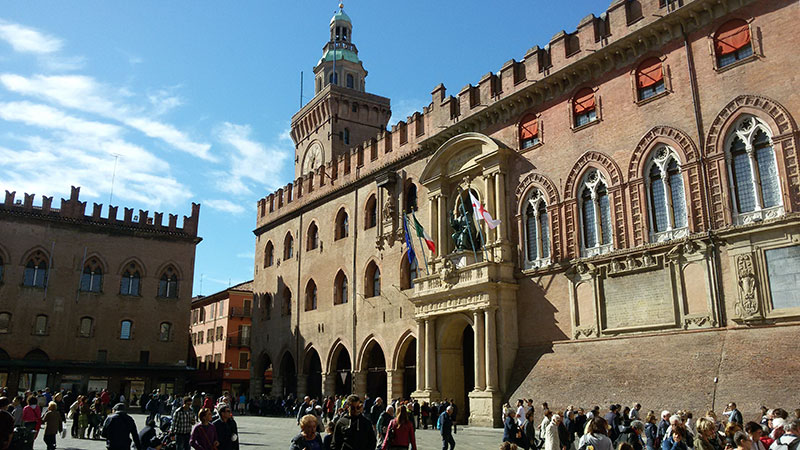 The end of via Rizzoli opens out to Piazza di Porta Ravegnana, dominated by the massive dimensions of the two Towers, Asinelli and Garisenda, symbol of the city. Nearby you can access both Piazza della Mercanzia, distinguished by a beautiful fourteenth-century building, and Piazza Santo Stefano with the renowned complex of the “seven churches” and Palazzo Isolani. Continuing along via Santo Stefano you will finally get to Piazza Carducci, dedicated to the poet Giosuè Carducci whose monument has stood proud in the square since 1928. 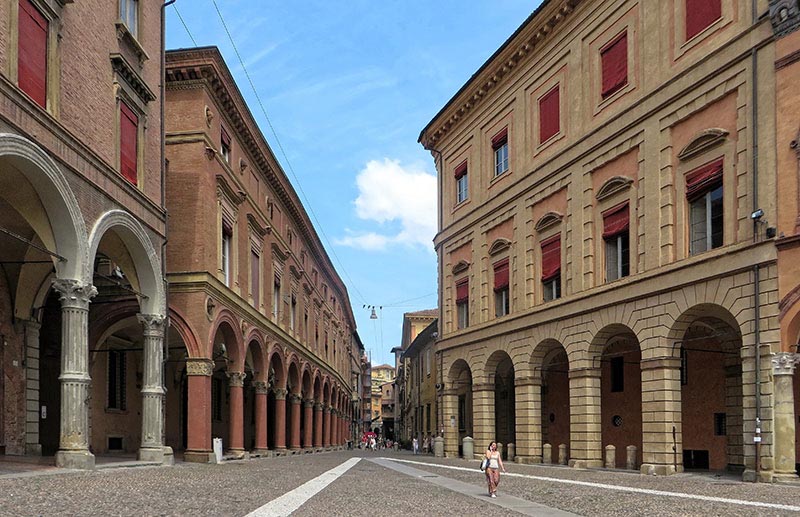 Other notable locations include Piazza San Domenico, particularly known for housing two tombs of the so named Glossators (the first university professors), Piazza San Francesco, and lastly, right in the middle of the university district, Piazza Verdi, with the Teatro Comunale, the city’s opera house. Squares have always been places for meetings and clashes, a natural stage for events, extremely versatile and ever changing over time, always in the heart of the city life.

This square, pounding heart of the medieval city, was opened at the beginning of 1200 during the construction works of the Palatium Communis Bononiae, now Palazzo del Podestà. Since 1212 the ringing of its bell, as know as the Arengo bell, used to summon the citizens to the assembly. The core of the City Hall located in the western part of the square, dates back to 1287. In 1365 the building was extended northbound and in 1478 its facade was decorated with the Madonna with child by Niccolò dell’Arca. In 1555 the two parts were connected by the magnificent gate decorated in 1580 with the statue of Gregory XIII. 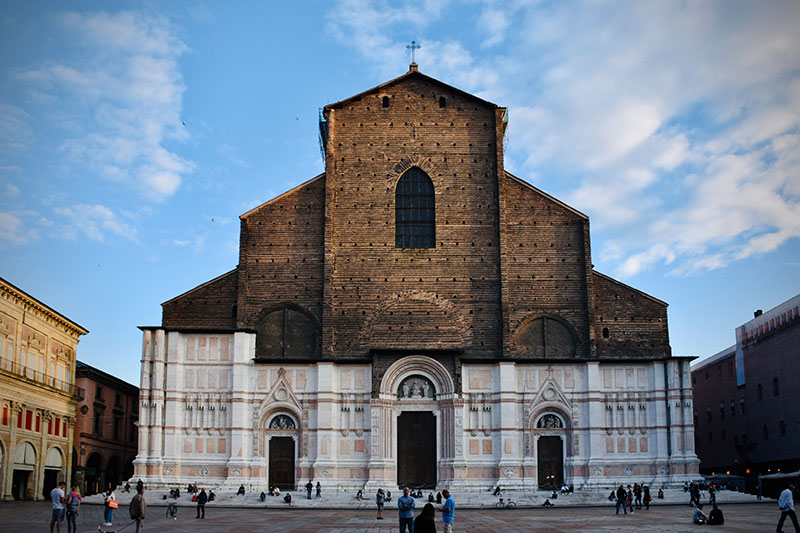 In 1390 the building works of the large Basilica of Saint Petronius started, strongly wanted by the Municipality of Bologna and designed by Antonio di Vincenzo. Several economic problems delayed the construction that took almost three centuries. The facade, still unfinished, is the clearest sign of a hard story.

It is the tenth-largest church in the world by volume, 132 meters long and 66 meters wide, while the vault reaches 45 meters inside and 51 meters in the facade, and the largest church built of bricks of the world. 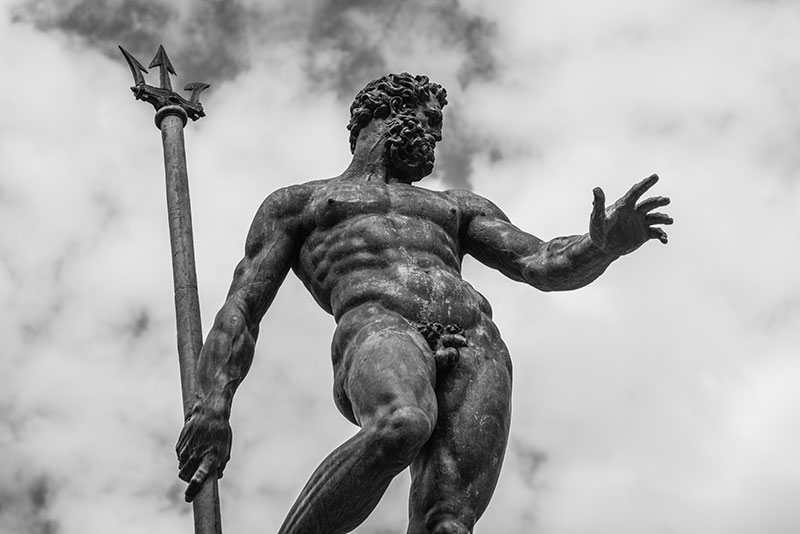 Created in 1564 by tearing down a block in order to enhance the large Neptune fountain wanted in 1564 by Paolo IV Medici. Tommaso Laureti designed the base while the Flemish artist Giambologna made the statue. The god of the sea reminds of the importance of waterways for the economic city life: since the 13th century waters made the wheels of several manufacturing works move, including the paper mills and the silk mills, the first were strongly needed by the University and the latter were well-known all over the world. 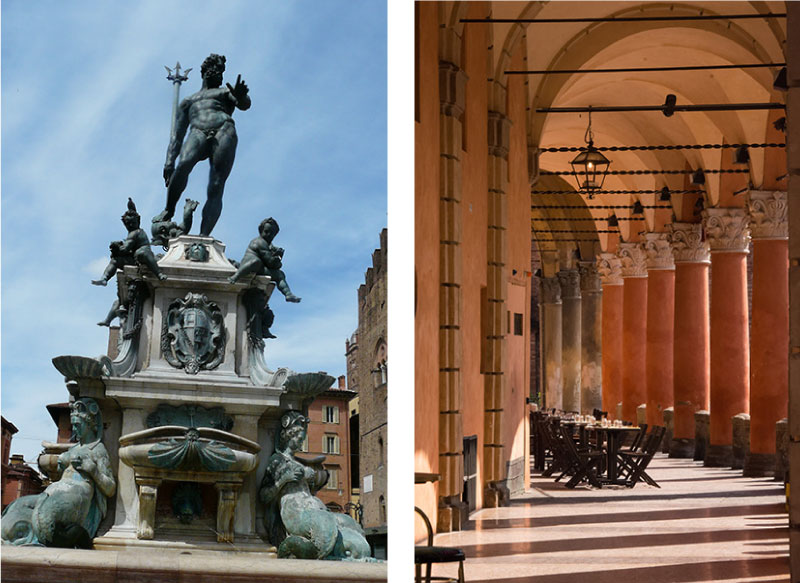 More than twenty medieval defensive towers remain out of up to 180 that were built in the 12th and 13th centuries before the arrival of unified civic government. The most famous of the towers of Bologna are the central "Due Torri" (Asinelli and Garisenda), whose iconic leaning forms provide a popular symbol of the town.

The cityscape is further enriched by its elegant and extensive porticoes, for which the city is famous. In total, there are some 38 kilometers (24 miles) of porticoes in the city's historical center (over 45 km (28 mi) in the city proper), which make it possible to walk for long distances sheltered from the elements. In 2021, the porticoes were named as a UNESCO World Heritage Site. 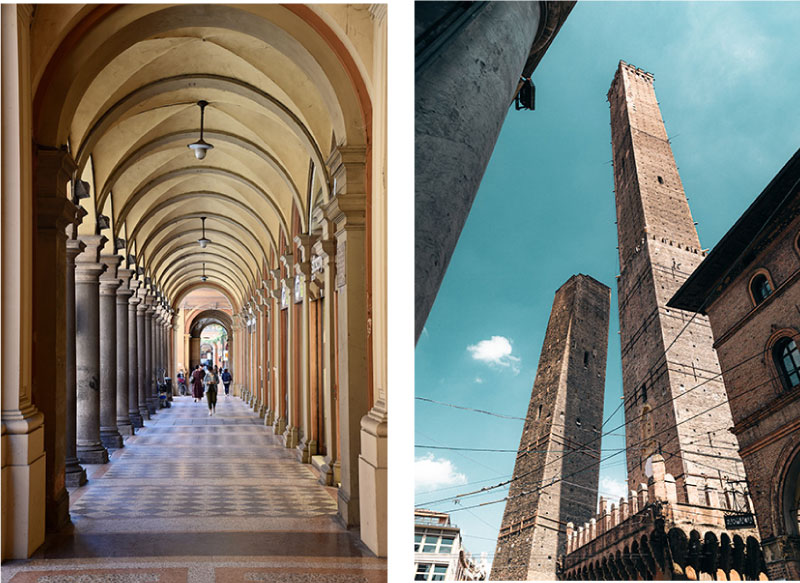 The Portico di San Luca is possibly the world's longest. It connects Porta Saragozza (one of the twelve gates of the ancient walls built in the Middle Ages, which circled a 7.5 km (4.7 mi) part of the city) with the Sanctuary of the Madonna di San Luca, a church begun in 1723 on the site of an 11th-century edifice which had already been enlarged in the 14th century, prominently located on a hill (289 meters (948 feet)) overlooking the town, which is one of Bologna's main landmarks. The windy 666 vault arcades, almost four kilometers (3,796 m or 12,454 ft) long, effectively links San Luca, as the church is commonly called, to the city centre. Its porticos provide shelter for the traditional procession which every year since 1433 has carried a Byzantine icon of the Madonna with Child attributed to Luke the Evangelist down to the Bologna Cathedral during the Feast of the Ascension. 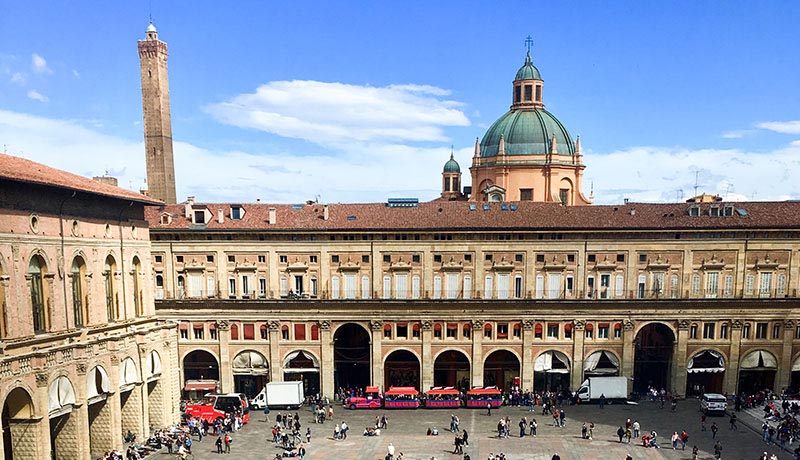 The Basilica of Saint Stephen and its sanctuary are among the oldest structures in Bologna, having been built starting from the 8th century, according to the tradition on the site of an ancient temple dedicated to Egyptian goddess Isis. The Basilica of Saint Dominic is an example of Romanic architecture from the 13th century, enriched by the monumental tombs of great Bolognese glossators Rolandino de'Passeggeri and Egidio Foscherari. Basilicas of St Francis, Santa Maria dei Servi and San Giacomo Maggiore are other magnificent examples of 14th-century architecture, the latter also featuring Renaissance artworks such as the Bentivoglio Altarpiece by Lorenzo Costa. Finally, the Church of San Michele in Bosco is a 15th-century religious complex located on a hill not far from the city's historical center.

Bologna  has the oldest university in the Western world, a lively student population, excellent food, a striking brick terracotta-roofed cityscape, and lots to see and do. The university was founded in 1088. A significant portion of its population consists of away-from-home university students. 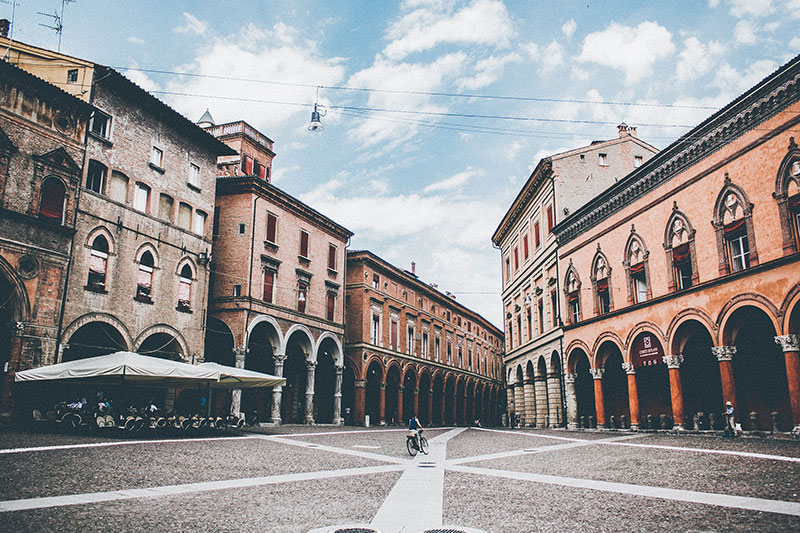 Bologna is famous for its cuisine (la cucina Bolognese). It is also viewed as a progressive and well-administered city. It is considered second only to Venice in beauty by many Italians and certainly has one of the largest and best preserved historic centers among Italian cities. Its architecture is noted for its palette of terracotta reds, burnt oranges, and warm yellows, hence the name of Bologna la rossa (Bologna the red). The extensive town center, characterized by miles of attractive covered walkways, known as "porticos," is one of the best-preserved in Europe.

The strategic location of the city molded its history. Inhabited since the 10th century BC during the Iron Age, it was fortified by the Celts and became a municipality under the Romans. The presence through the centuries of the Huns, Goths, Lombards, Franks, Austrians and French, have each left traces which are still visible on the city today. 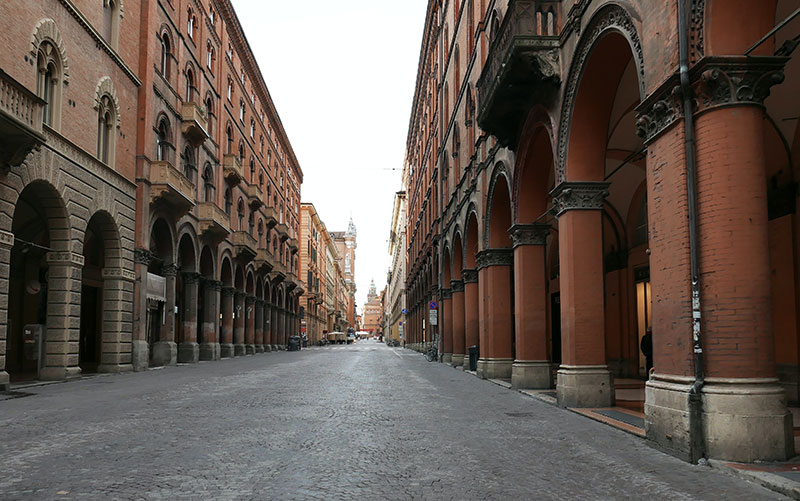 Bologna struggled for autonomy, having been dominated by emperors, kings, and the Church. It was ruled by the Pepoli and Bentivoglio families, and was a papal fiefdom. The papal power made it a city of the Guelphs, while many of its residents supported the anti-Papal Ghibellines. Bologna had the first city council in Italy, and was, with the Liber Paradisus law in 1256, one of the first cities in the world to abolish slavery. This political activity was rooted in the lively environment surrounding the Alma Mater, as the university was known.

Bologna was named a Creative City of Music by UNESCO in 2006. Music is performed throughout the city: in the Teatro Comunale (the Opera Theatre), by the Orchestra Mozart youth orchestra, founded and directed by Claudio Abbado, and in clubs and inns where jazz is regularly played. There are open-air concerts and music can be heard at the Conservatory, the Opera School, and hundreds of music associations operating within the territory. 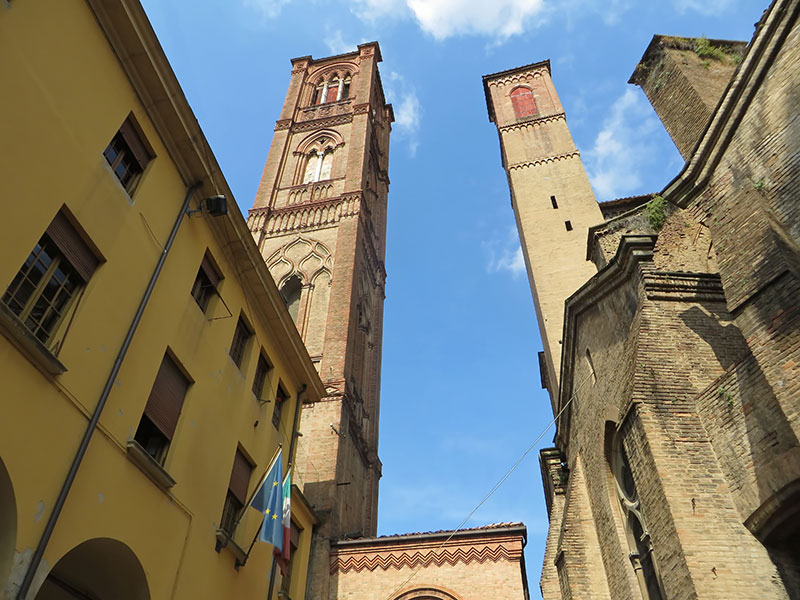