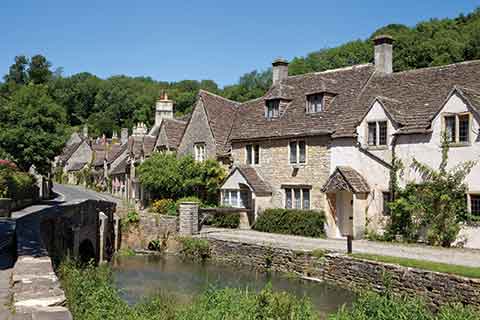 9.00am. Departure from hotel.
9.30am Arrive at Castle Combe in the Cotswolds. Voted the prettiest village in England in the 1960’s and nothing has changed since then. Very calm and peaceful at this time of day. Nestling in the wooded valley with the stream flowing through its center. It’s just one tiny street, with weavers cottages, market cross and medieval church.
Visitors have been coming to enjoy its charms for at least a century and the small street leading from the Market Cross down to the By Brook is as picturesque today as it ever was. 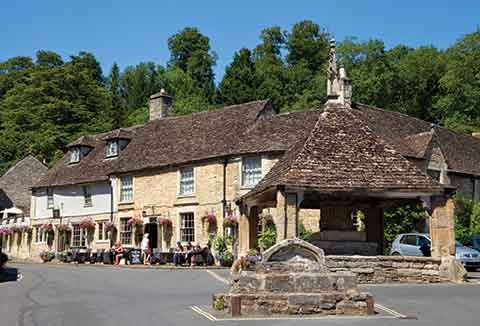 By the Middle Ages the village in the valley had become an important center for the wool industry. The spinsters and weavers lived in the cottages (hence names such as "Weaver’s House") and the river, still known as By Brook, provided the power to run the mills.
The village houses are all of typical Cotswold type, constructed in stone with thick walls and roofs made from split natural stone tiles. The properties are many hundreds of years old and are listed as ancient monuments. Strict rules apply to preserve the beauty and character of Castle Combe for later generations to admire.
Castle Combe is situated on the southern-most edge of the Cotswolds and is approximately 12 miles from the Georgian city of Bath.
We spend 30 minutes here.
9.30 – 10.30. Meander through beautiful countryside and Cotswold villages to arrive at Bibury and Arlington Row. We will have 45 minutes here to wander across Rack Isle where, traditionally  the woolen cloth would be dried and . This is a very photogenic village, with a few small shops and a café by trout stream.

Bibury village is on both banks of the River Coln which is a Thames tributary. Arlington Row here is a nationally notable architectural conservation area depicted on the inside cover of all United Kingdom passports. It is a main tourist destination for tourist visiting the traditional rural villages, tea houses and many ornate protected buildings of the Cotswold District.
The nineteenth-century artist and craftsman William Morris called Bibury "the most beautiful village in England" when he visited it.
The village is known for its honey-coloured seventeenth century stone cottages with steeply pitched roofs, which once housed weavers who supplied cloth for fulling at nearby Arlington Mill.
The picturesque Arlington Row cottages were built in 1380 as a monastic wool store. This was converted into a row of cottages for weavers in the seventeenth century. The cloth produced there was sent to Arlington Mill. Arlington Row is probably one of the most photographed Cotswold scenes.
11.15 – 12.00. Driving through the beautiful Coln valley to Stow on the Wold. This traditional market town has many interesting pubs, cafes and small independent shops. We make this our lunch stop and will be here for approximately 2 hours.

Stow on the Wold is a delightful market town (population 2000), one of the best known of the small Cotswolds villages.
The vast Market Square testifies to the towns former importance. At one end stands the ancient cross, and at the other the town stocks, shaded between an old elm tree. Around the square the visitor is faced with an elegant array of Cotswold town houses and shops.
Sunday is a day when locals will  be out for “Sunday lunch” – traditional roast dinner, so places to eat can get busy.  Would you like to book a venue in advance, such as the Queens Head is in the main market square, or allow the group to explore separately.
2.00pm – 2.15. Depart for Lower Slaughter. No buses or minicoaches are allowed in this village so we will park at a riding stables and there is a 10 minute pleasant level walk into the village. There is an old mill here, with a very picturesque shop and cafe,  and the most lovely stream with small stone bridges  - google street maps voted it to be the most romantic street in England!

At the west end of the village there is a 19th-century water mill with an undershot waterwheel and a chimney for additional steam power. There is a ford where the river widens in the village and several small stone footbridges join the two sides of the community. While the mill is built of red brick most of the 16th and 17th century homes in the village use Cotswold sandstone and are adorned with mullioned windows and often with other embellishments such as projecting gables.
Lower Slaughter has been inhabited for over 1000 years. The name of the village of Lower Slaughter stems from the Old English name for a wet land 'slough' or 'slothre' (Old English for muddy place) upon which it lies. This quaint village sits beside the little Eye stream and is known for its unspoiled limestone cottages in the traditional Cotswold style. The stream running through the village is crossed by two small bridges and the local attraction is a converted mill with original water wheel selling craft type products and includes a cafe.

3.30pm -4.20pm. Driving to Tetbury market town. This has a lovely  17th century market hall and  wonderful  Cotswold architecture. A short comfort / photostop here for 20 mins .  Tetbury, an historic wool town, is the southern gateway to the Cotswolds. The town is known as an architectural gem with many of the wool merchants’ houses remaining  the same as they were in the 16th & 17th centuries during the height of it’s the town’s prosperity from the wool trade.
4.40 – 5.30pm. Return drive to Bath